Apparitions in the Fog @ The Burning Platform In this apocalyptic article, Jim Quinn exposes the foundations of the present economic “system”. With the assistance of a series of charts, it is convincingly argued that: the economic recovery is a mirage, that the middle class is being destroyed in the USA, and by extension in the western world, and that a bigger crisis, not only economic but social also, is unavoidable. From this, he draws apocalyptic conclusions that might or might not come to happen. Actually, one could think of apocalyptic scenarios quite different from Quinn’s. Think “1984” squared. If you concentrate on the charts and what they mean though, you’ll not go wrong as to the nature of the present economic and social situation. Some excerpts and many charts:

“Real GDP, using a dramatically understated inflation rate, has barely grown by 1% in 2012. Using a true measure of inflation, the GDP was -2% during 2012.”

“The number of people who have left the workforce since last December (2.2 million) almost matched the number of newly employed (2.4 million), as the labor participation rate has collapsed to a three decade low of 63.6%. The propagandists attempt to peddle this dreadful condition as a function of Baby Boomers retiring. This is obliterated by the fact the 55 to 69 age bracket has added 4 million jobs since Obama became president, while the younger age brackets have lost 3 million jobs. The working age population has grown by 13 million since 2007 and there are 4 million less people employed.”

“Another 1.5 million Americans were forced onto food stamps during 2012, bringing the total increase to 17 million since Obama assumed office.”

“Real average hourly earnings were flat in 2012, and have fallen 1.5% since Obama became president. The average middle class worker is making less than they were forty years ago.”

“The reason Bernanke, Geithner, Obama, Wall Street, corporate titans, and media pundits focus their attention on the stock market is because they are looking out for their fellow 1%ers. The working middle class, once the backbone of this country, own virtually no stocks.”

“The storyline of austerity and deleveraging perpetuated through the mainstream media mouthpieces is unequivocally false, as consumer debt has reached an all-time high of $2.77 trillion, driven by a surge in subprime auto loans and subprime student loans.”

The enslavement of our children in student loan debt and handing them the bill for $200 trillion of unfunded entitlement liabilities will be the spark that ignites the worst part of this Crisis.

“Those in power realized very quickly that without continued credit growth, their entire corrupt, repugnant, fiat currency based debt system would implode and they would lose all of their fraudulently acquired wealth. That is why total credit market debt is at an all-time high of $56 trillion, and 350% of GDP. The National Debt of $16.5 trillion is now 103% of GDP, well beyond the Rogoff & Reinhart level of 90% that always leads to economic crisis and turmoil.”

“A critical thinking human being (this rules out 95% of the adult population) might question how corporate profits could surpass pre-collapse levels when the economy has remained stagnant.”

“Shockingly, the entire profit surge was driven by Wall Street.” 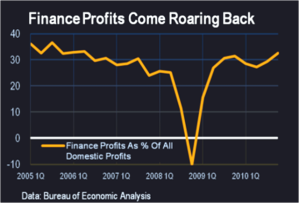